Exhibition design of the new Nature Center Can Soler (CNCS) 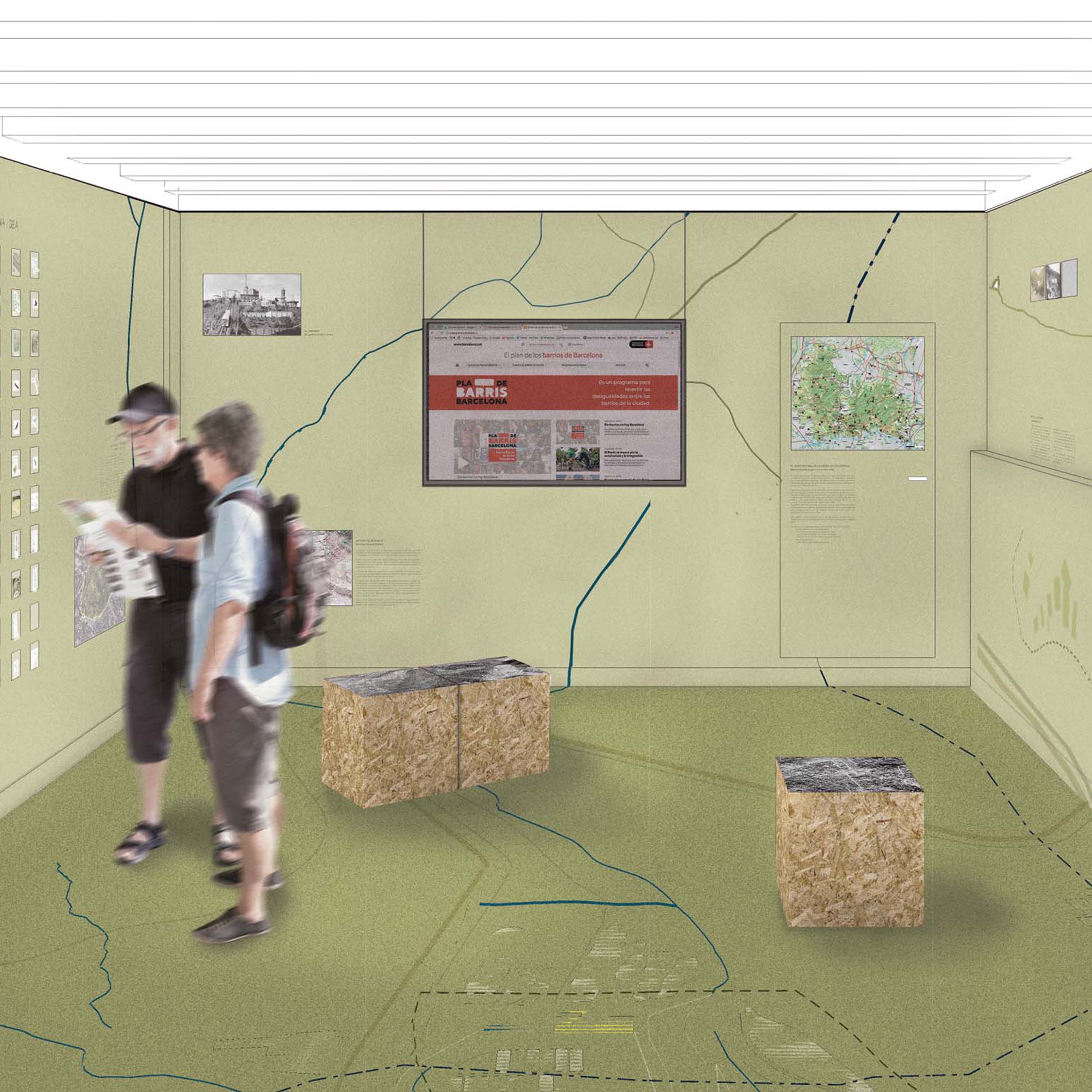 The project is part of the project Defining New Communal Uses for the Surroundings of Can Soler, one of the engine projects of Pla de Barris at Sant Genís dels Agudells and La Teixonera that had coordinated a participatory process where various proposals have been collected, including the creation of a small Nature Center in Can Soler (CNCS).

The CNCS will offer an exhibition hall to spread the preliminary project and executive project, in addition to the natural values and landscape of the valley during the period or works for the new community uses the surroundings of Can Soler.

The Center is located on the ground floor of the Can Soler farmhouse (35m2) and it will remain during the following two years in which the company Argelaga Servicios Ambientales will develop pedagogical activities.

The thread of the exhibition is the notion of VALLEY ( Fuente del Bacalao torrent) which expresses with forcefulness the urban, human and natural geography of the place. The Valley allows us to read and understand the relationship between the urban and natural environment, the transition and the connector and ecotone effect of this hinge space where the Can Soler farmhouse is located and specifically the CNCS hall.

For that reason the hall can be conceived as the connection between the urban and the rural, between anthropic and the natural, the city and the mountain, and is the Valley section and its floor plan representation which allows us to identify that connection and gradation. We take as a reference The Valley section image of Scottish biologist, sociologist and urban planner Patrick Geddes defined in his publication Cities in Evolution in 1915. It is from de Valley where we can aware of the management of natural resources by the communities.

The Valley allows us to identify the transition between the dense city, the less dense neighbourhood, the semi-urbanized surroundings of the Can Soler farmhouse, the farmhouse as a ball joint space, the recovered agricultural terraces, the torrent hollow and finally the access to the mountain once we cross the roadway.

Each of these areas are explained from the past, present, and future vision in relation to the cultural landscape, the architectural project of the environments improvement and the natural habitat of the place that are the premises to bear in mind.

This transposition fits nicely with the hall orientation and its location on the ground floor inside the farmhouse.

Therefore, the strategies of the story focus on:

-looking for the unity and global conception of space within the scale itself, allowing the identification of the large and small scale. This involves treating soil, roof and walls as the valley’s own supports.

-synchronized reading (past, present and future are explained in parallel).

-relation in / out, generating elements that go outside (such as the scheme in the entrance door and the pavement in the porch).

-the experience and tribute to the place (singling out the concept of valley, threshold and connection).